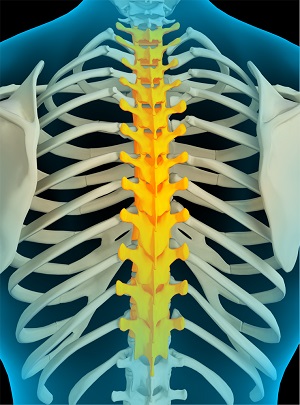 Thoracic spine is the central part of the spine, also called as dorsal spine, running from the base of the neck to the bottom of your rib cage. The thoracic spine provides flexibility that holds the body upright, protecting the organs of the chest.

Spine is made up of 24 spinal bones, called as vertebra, of which, the thoracic region of the spine is made up of 12 vertebrae (T1-T12). The vertebrae are aligned on top of one another to form the spinal cord giving posture to our body. The thoracic spine includes bone and joints, nerves, connective tissues, muscles, and spinal segment.

On each side, the left and right side of the vertebra, is a small tunnel called ‘neural foramen’. The two nerves that leave each vertebra pass through this neural foramen. These spinal nerves group together to form a main nerve that passes to the organs and limbs. These nerves control the muscles and organs of the chest and abdomen. An ‘intervertebral disc’ is present in front of this opening which is made up of connective tissue. The discs of thoracic region are smaller in comparison to cervical and lumbar spine.

The spine muscles are arranged as layers, a strap-shaped spine muscle, called ‘erector spinae’ makes up the middle layer of the muscle. The deepest layer of muscles attaches along the back of the spine bones and connects to the vertebrae. These muscles connect one rib to the other.