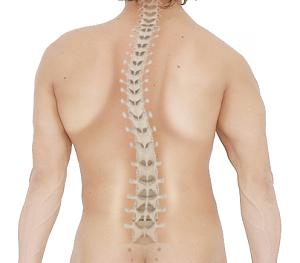 The spine has natural curves that alternate from top to bottom to better absorb the various pressures applied to it. The thoracic region of the spine has a “C”-shaped convexity; an exaggeration of which results in a condition called kyphosis. Kyphosis is characterized by an abnormal spinal curvature, which causes a physical deformity of the upper back commonly known as hunchback. Kyphosis mainly affects the thoracic spine, but sometimes the cervical and lumbar spine may also be affected as the curvature reverses from concavity to convexity.

Kyphosis may develop because of degenerative diseases such as traumatic injuries, osteoporotic fractures, arthritis, disc degeneration and slipped-disc. It can also be caused by malignancies or infections of the spine, poor posture, structural deformities such as scoliosis (abnormal sideward bending of the spine) and abnormal development of the spinal column before birth. If you have undergone radiation and chemo therapy for management of malignancies, you may have a risk of developing kyphosis.

Kyphosis can lead to back pain, weakness, fatigue, stiffness, tenderness and in severe cases, difficulty in breathing. When you present to the clinic with these symptoms, your doctor will take a thorough family and medical history, and perform a physical examination to evaluate the shape of the spine, strength of the muscles and neurological function to arrive at an accurate diagnosis. Various diagnostic tests such as X-rays, MRI and CT scans may also be performed to view the structures of the spine and evaluate the curve.

The treatment options for kyphosis can include conservative and surgical methods. Conservative treatment is the initial choice and includes pain and anti-inflammatory medications, exercises and supportive braces (in children) to support curves of more than 45°. If osteoporosis is the primary cause of kyphosis, slowing the progression of osteoporosis is recommended through the intake of vitamin D and calcium supplements, hormone replacement therapy and regular exercise.

Spinal surgery is considered for congenital kyphosis and kyphosis greater than 75° that is not relieved with non-surgical methods. The goal of surgery is to re-align the spine and fuse the vertebrae to form a solid bone and reduce the deformity. Metal screws, plates or rods are employed to hold the vertebrae in place during fusion.

Adult kyphosis, the condition of curve in spine is categorized into the following major types:

Postural kyphosis is the result of poor posture and is common in adolescents and younger adults. Slouching posture when sitting or standing tends to cause the spine to curve forward. It is often associated with hyper lordosis of the lumbar portion of the spine. The lumbar spine normally has an inward curve. Hyperlordosis means the lumbar spine curves too far in the opposite direction. Postural kyphosis can be rectified by adopting correct posture while sitting and standing along with strengthening exercises for back muscles.

Scheuermann's kyphosis is a condition in which the thoracic curve is between 45 and 75 degrees. Vertebral wedging of more than 5 degrees can be seen in three or more adjacent vertebrae. In these cases, the vertebrae appear triangular shaped. At the ends of the wedged vertebrae, Schmorl’s nodes (small herniation’s of the intervertebral disc) are formed. Exact cause for Scheuermann’s Kyphosis remains unknown and the probable causes may be avascular necrosis of the cartilage ring of vertebral body, vertebral disorders, or mild osteoporosis.

Congenital kyphosis is an inherited condition of spine caused because of abnormal development of spine in womb. There may be incomplete formation of the spine present at birth, which later can lead to a severe abnormal kyphosis. It may also cause paralysis of the lower part of the body. Congenital abnormalities in the urinary collecting system may also be associated with this type of kyphosis.

Surgery is considered successful in treating severe congenital kyphosis. Generally, early surgical intervention is said to provide good results and halt the progression of the curve further. However, non-surgical means are less suitable for this type of kyphosis.

Spinal injuries can lead to kyphosis and nerve problems in the spine. Most of the times, when there is vertebral fracture in the thoracic or lumbar spine some degree of kyphosis may result. Post-traumatic kyphosis can be treated with bracing or surgery depending on the severity of the condition.

Post-surgical Kyphosis is the development of kyphosis following the spine surgery to correct other defects. This occurs when the healing is improper after surgery. A spinal fusion may not heal completely leading to unstable fusion which may cause the spine to collapse. The ligaments of the spine may not heal in an adequate manner to support the vertebrae and a kyphosis may develop. These problems need to be corrected with a second operation.

Degenerative kyphosis may be caused by wear and tear of the lumbar portion of the spine. The degenerative process results in collapse of the intervertebral disc, changes in the shape of the vertebrae, and weakening of the ligaments that support the spine. This can cause kyphosis over a long period.

Systemic diseases also can cause kyphosis over time. These conditions include infection in the spine, cancer or tumors of the spine, and certain types of systemic arthritis. Kyphosis can also develop in people who have had radiation treatment for malignant cancers in their childhood.